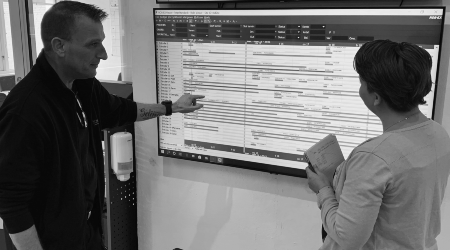 Knudsen Extrusion in Præstø, Denmark, has achieved great benefits from introducing ROB-EX as a planning tool in the production. Planning used to be made in Excel sheets, on boards and post-it notes but after implementation of ROB-EX big displays have been mounted around the production floor so that everyone can see the current status of the production. An order confirmation which used to be up to 48 hours in the making can now be delivered in five minutes.

Accessible information not only provides a great overview, it also promotes ownership to the process between employees in the production. COO Stig Bergendorff from Knudsen Extrusion explains: “Our co-workers have been given much more responsibility and ownership because they now can see the plan at all times and see how their work influences on the whole. They report back frequently, 1 to 3 times a day, and then we update the plan so that everybody sees what’s happening right now. The employees now understand the difference they make, encouraging them to take much more responsibility for the production than before.

With ROB-EX the planning process at Knudsen Extrusion has become easier, faster and with less friction. It used to be a cumbersome work to process a customer order because the consequences had to be calculated in Excel. Now the planning staff can execute quick and precise analyses in ROB-EX so that the customer can get an almost immediate response.

“We have a quality target stating that customers must have order confirmations within 48 hours. If you ask me, we could cut that target to 10 minutes – in fact, we often can confirm in 5 minutes or less”, Stig Bergendorff explains.

Acceptance from the production staff?

Replacing a system can be an unwelcome change for those who are supposed to use it in their daily routine. But the benefits of ROB-EX were immediately so obvious that it went surprisingly smooth.

“It was far easier to obtain the acceptance of ROB-EX from the employees than we expected. They had grown used to post-its and printed Excel sheets on a weekly basis on which they could tick off boxes as production went along. But after just a single day, they had accepted that ROB-EX was their new planning tool.”

“The actual implementation was easier than expected”, Stig Bergendorff continues. “And much faster. We had a deadline on October the 1st where everything had to be ready. We had completed implementation way earlier than that.”

After consulting ROB-EX Knudsen Extrusion chose a standard activation. This is a simple and fast activation which means that the customer can begin reaping the benefits of ROB-EX quickly. In fact, it soon became clear that the solution gave much more value than expected.

“Before we went live, we had two weeks with the old planning process in Excel, and then we jumped into it. Now we do everything in ROB-EX. We have put up displays and we use the system as planned”, Stig Bergendorff concludes.

Even more benefits to come

ROB-EX is now an integral part of the daily planning routines at Knudsen Extrusion. The company wants to exploit the system to an even higher degree and is preparing to pull data from purchasing and material handling into the system in order to optimise the scheduling even more.

Knudsen Extrusion is an order-producing company that manufactures extruded hoses, tubes, flat tapes and profiles in a variety of thermoplastic materials. The customers come from industries such as automotive, pharma, wind energy plus oil and gas, where high quality and reliable supply has top priority. This means that production planning is a critical factor for Knudsen Extrusion.