Setup and configuration of Sequencer 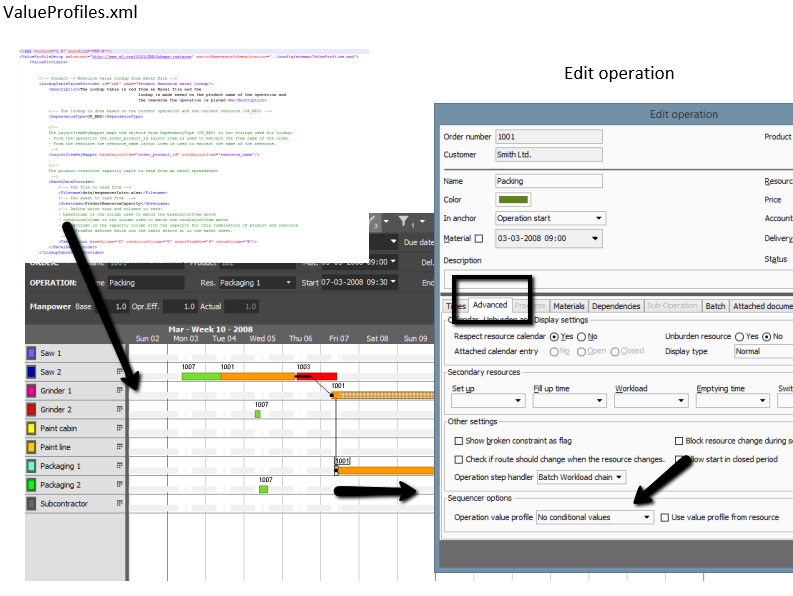 There are two ways of assigning value profiles to operations:

The concept of value profiles is shown below:

The overall XML structure of the ValueProfiles.xml file is as follows:

Syntax for defining a ValueProfile

The first step is to configure one or more ValueProviders (see syntax below) which in turn later in the file will be used when defining ValueProfiles. A ValueProvider define how the capacity or workload should be calculated or looked up.

When one or more value providers have been added they can be used in the definition of the value profile. An example definition of a ValueProfile with id=“p1” and name=“Profile 1” is shown below:

The possible keywords for the step parameter on the tag are:

!Do not set value providers on capacity AND workload at the same time, since the capacity value effectively all affects the workload calculation.

Syntax for defining a Value Provider

The job of a value providers is to return a single value and assign that value to an operation work step or an operation capacity. To define the values, ValueProviders are used. Values can be looked up in a table or calculated.

There are several ValueProvider types:

In the following sections the available value providers are explained.

Below is an example of a Lookup table value provider:

Always define an unique id and a unique name to the value provider. The description is optional.

The dependence type describes on which values this lookup table should work. There are several types to choose from:

The first part of the dependence type is the “base” and the second part is the “condition”. For OP_RES, OP stands for operation and is the base object used in the table lookup and RES stands for resource and is the conditional value in the lookup. In OP_NEXT_OP both the base and the condition is an operation.

* “Scheduled” operation means an operation which is either not selected for being scheduled at all (already planned operation) or an operation that has already been scheduled in this same run. As an example

Even though the example above explains how the base and conditional operations are selected for the “OP_NEXT_OP” and the problems this has with scheduling forward, then note that similar problems may also be able to happen even if the same example was executed using a backward strategy. I.e. the scheduling rules cannot currently guarantee that the “next” or “prev” operation is known, until all scheduling has run to the end. Also see the chapter on Sequencer limitations

The LayoutItemKeyMapper maps the base object and the condition object to strings used in the table lookup. The names of available layout items can be found here: Layout item list

If the base or condition object is an operation the valid layout items can be any of the variables under common, operation, production order or project in the list.

It is possible to get the table values from an excel spreadsheet, a database or a stored procedure in a database:

<DefaultValue>:
The DefaultValue is used as a fallback when a value is not found for the given base and condition objects.
If the ‘layoutItem’-attribute is a valid layoutitem and it returns a value that can be parsed as a double, then this value is used as the default, otherwise the fixed value is used.
A list of layoutitem can be found in the Layout item list.

There are two ways of reading excel sheets, either read it as a table or as a matrix:

The database data provider reads the table values by executing an sql-query against an database. The JDBCDataProvider element is used to define the sql-query and connection:

The important part of the sql query is the AS BASE, AS COND and AS VALUE in the sql query. When the data is loaded these columns will be looked up in the resultset!

The Connection is defined by:

<Driver>
Name of the driver to use, the options are:

For all MS SQL server editions always use the MSSQL_SERVER_JTDS driver!

<URL>
the connection string to the database, see examples above.

<Login>
The username to the database

The MUDataProvider gets its data from a call to a stored procedure in the multiuser server database. The stored procedure to call is given by the name defined in the StoredProcedure element.

The MUDataProvider will be loaded each time a user log in to the multiuser and only then, making it the preferred method of loading sequencer data when users are connected to a Multiuser environment.

The below example shows a MUDataProvider, setup to call a stored procedure named ‘spLocal_SetupTimeMatrixMaterial’.

Sample XML and SQL queries creating and using this stored procedure ‘spLocal_SetupTimeMatrixMaterial’ can be found in a comment of <sch_client_dir>\data\ValueProfiles.xml and are as well provided below. The stored procedure serves as a template for the general structure of how a stored procedure should look like. It should be further edited to the actual needs.

The requirements for a stored procedure are as follows:

The username is the username of the user logging in, the siteId is the id of the site the user is logged in to and the ValueProviderId is the name defined in the ValueProfile XML element (“area1” in the example below).

This provide example data to insert into the table

For more info it is recommended to look at the stored procedure ‘spLocal_SetupTimeMatrixMaterial’ in <sch_client_dir>\data\ValueProfiles.xml.

Also note that a script may trigger a load or reload of the stored procedure core values, using the gantt.plugin.PluginAPI.lookupDataprovider(MUValueProviderLookupArgs args) method. In fact this method may be used for custom loading of any stored procedure provided values from the Multiuser – also values not directly related to value providers. The only requirement of this method is that a user is logged into the multiuser server, at the point in time when the method is called.

An example could be a tank operation where the tank must remain occupied until a laboratory operation is finished, or any setup where a resource is not released until another operation finishes further down in the route.

!When using Expand step value provider the ‘In anchor’ and ‘Out anchor’ of the operation MUST be set so that they are not affected by the step being expanded. E.g. if expanding switchover, the anchors MUST be before switchover!!!
Expand step value provider does NOT support resource efficiency being applied to the step being expanded! Resource efficiency can be disabled for e.g. switchover by setting WorktimeStep.SWITCHOVER.useResourceEfficiency=false in GanttSetup.properties. For more info, see GanttSetup.properties

The definition of an ExpandStepValueProvider is shown below:

Again it is defined with an id and name.

StepToExpand: This defines the step to adjust according to a operation further in the route. It can be set to any of:

RouteOperationCollector: This defines how the operation is found that defines the length of the step. This is done by setting up a pattern, and when an operation in the route matches that pattern is it added to the list of operations that define the step length. There are several options to define the match. The layoutitem defines which field from the operation is matched against the pattern.

In the above example the first operation in the route with a name matching “painting” is used to adjust the switchower time.

AlignWith: can be any of:

This could be useful if you have eg. have a setup that is the maximum or >This value provider can aggregate several value providers.

This could be useful if you have eg. have a setup that is the maximum or combined value of several lookup tables.

Below is an example of a AggregatedValueProvider

It is defined by an Aggregator and a list of value provider id’s:

Aggregator: can be any of: