As an example of how to get started using alternate routes these step-by-step instructions shows how to configure a simple plan to use alternate routes. The example shown below is available in the planning file “\data\alternate route example.xml” distributed as part of the client installation.

This example will demonstrate how “Product A” can be produced in two different ways: 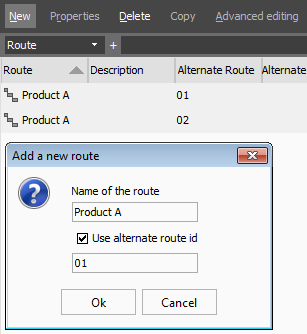 This route is modeled with only a single operation

The route is modeled with two operations 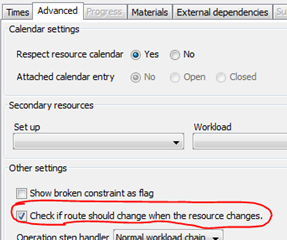 Enabling this flag instructs ROB-EX to include alternate routes in the list of alternate resources, like shown below where the bottom circled row is an alternate route and the top three rows are actual resources (machines).

Create an order using e.g. the 01 version of Product A and schedule the new order into the plan with status “Planned”
In the “Edit order” dialog when creating the new order, notice how the route selection chooser includes the alternate route name in ()

The result of selecting the “02” alternate route is the following

Important note: If the selected resource has a resource type assigned, then an alternate route must have at least one operation in the route assigned to the same resource type – otherwise it is not seen as an alternative. This adds an additional configuration flexibility into the selection process.