The ROB-EX Automation interface is TCP/IP based allowing it to be triggered from any PC on the network.

Note that the ROB-EX automation interface is not DCOM based and it do not allow ROB-EX to be controlled via e.g. Visual Basic scripts etc. So do not confuse this with the Windows term of the same name.

To learn how to create a macro please read the chapter on Macro editing.

All ROB-EX planner clients can function as an Automation Server, e.g. the host where the macro is being executed. ROB-EX viewer clients cannot work as automation servers.

Also note that the ROB-EX Multiuser Server can not work as automation server host either, only ROB-EX planner clients can.

To enable/diable automation support in a planner client select the “Integration” tab in the menu “Function->Settings->General”.

The default port number to listen on is 14324. If you experience conflicts with other applications using the same port change to a different port number. Also note that on a Windows/Citrix Terminal Server you may have multiple ROB-EX clients started each trying to start up the Automation Server interface. In that case it will be necessary to select a different port number for each of the clients.

Checking “Broadcast integration status” will broadcast the status when login in to the multiuser.

To trigger or call an existing ROB-EX macro through the automation interface there is two ways of doing this.

You can either make a macro with the command RunMacro or you can use the external executable “ROB-EXCMD.EXE” located in the directory \bin\ROB-EXCMD.exe (where is the directory where the planner client is being executed from). 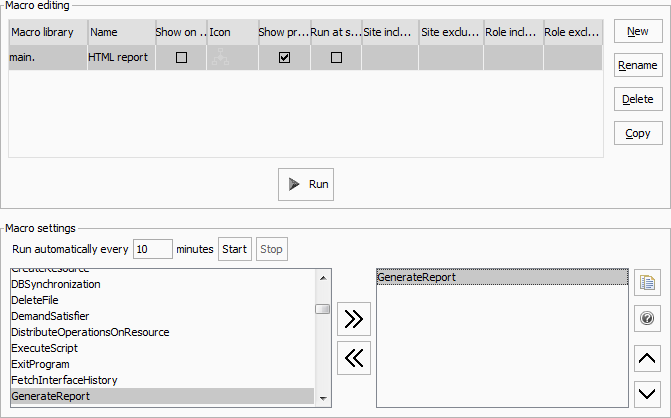 this macro can be called by an external program by calling the ROB-EXCMD.exe command with the following parameters

As an example you can create a windows shortcut to ROB-EXCMD.exe and then add the parameters to the shortcut: 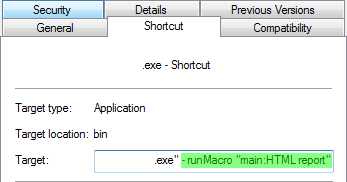 Macros in ROB-EX are divided into domains, typically each plugin has it’s own domain.
Each domain persists macros in it’s own separate XML file, the main domain is persited/saved in the XML file “mainMacro.xml” located in the ROB-EX user configuration directory (ie. c:\documents and settings\\robex\ganttPlanner\mainMacro.xml).

Each plugin (i.e. ERP Database) defines standard built in macros for running the integration. To trigger the macro being called when manually pressing the “ERP Database” synchronization button

you would run the following command

You can see all possible parameters that can be passed to ROB-EXCMD.exe by specifying -help as a parameter to the program