Resource Transition Rules will add more detailed constraint modeling, down to single-resource and single-product. The transition rules enable the possibility to block resource changes depending on the previous or next operations (i.e. not only based on the current operation, but also where it comes from and is going to).

Transition rules also allow us to reserve extra equipment between operations in a route depending on which resource the operation is allocated to.

The ordering of the rules matter. When evaluating the rules, less constraining rules will not be considered if there were a match with a previous, more constraining, rule. E.g. if there is a rule in the list with a product and that product matches the source operation, then this rule is more constraining than rules without a product, so if we encounter rules further down the list, that does not have a product that matches the source operation, then these rules will be skipped.

Apply transition rules when the physical equipment has limitations. In the process industry, it is very typical where liquid is pumped between tanks using physical pipe connections.

Example1: The size or complexity of a product limits an order to selected resources only

In the following example Fanuc handles cutting of very large and complex products. Only two welding operators are qualified for handling products from Fanuc, so it is only possible to go from “Fanuc” to “Andrew” or “Nick” (Peter and Poul are not allowed).

The transition rules are checked both ways, so if the welding operation is currently on Nick, Cincinatti cannot be selected for the cutting operation 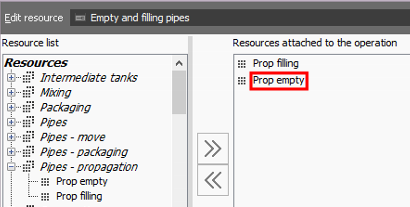 *The destination resource columns (Ids and names) accept the special character ‘*’ as input, meaning ‘all resources’.