This macro will analyze the selected orders and create CIP orders, if necessary, according to the CIP rules. For an example plan demonstrating how to use the CIP rules, see the general introduction of the Batch module.

The picture below shows four orders before the macro has been executed. The resources “Pasteurizer” and the “Past milk tanks” are configured to be “CIP’ed” (see preconditions below). 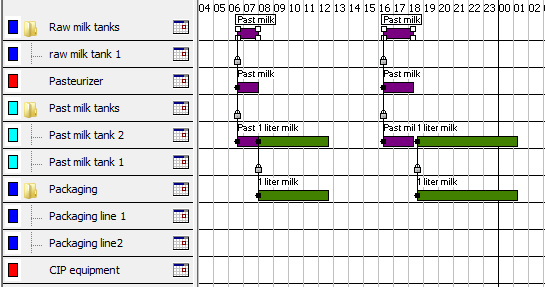 The picture below shows the result after the macro has been executed. Two CIP orders have been created (the yellow operations).

Two different rules are used. On the Past milk tanks a “Tank” rule is used and on the “Pasteurizer” an “Equipment” rule is used . Those rules are setup per resource, as explained in the preconditions chapter below. 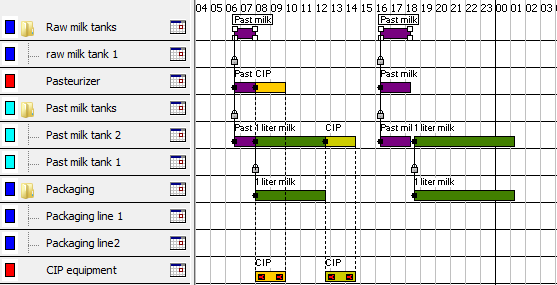 On the “Past milk tank 2” a CIP is created after the emptying operation (the green one). in that way it is ensured that a tank is not scheduled for a cleaning while it is not empty.

On the below example the second milk order has been delayed to the next day – which causes some more CIP orders to be created, since more than 20 hours has passed since the previous CIP.

Also notice how CIP orders are planned taking the limited capacity of the available CIP equipment into consideration. I.e. in the above example there is only a single piece of CIP equipment available.

Preconditions and how to configure 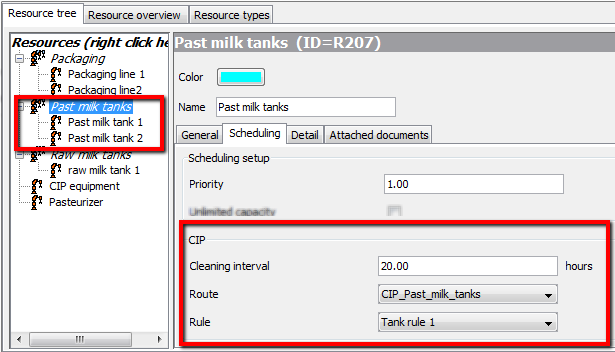 The “Route” combo box will show template routes where the “CIP” flag is enabled (possibly manually add the “CIP” column to the Edit->Route table if not shown for your configuration):

cipOrderColor
Specify the color of the CIP orders to be generated.
Possible colors (must be typed exactly as below):

operationSelectionStrategy
Here it can be specified which operations should be passed on to the CIP rule – and how.

“CIP before earliest and after latest of the selected operations”

resourceName
Specify a resource (or group) name in order to have CIP orders created with certain cleaning interval on that resource – independently of existing orders (no operations should be selected).

At present time only relevant for the following rules:

“none” must be specified in operationSelectionStrategy.

Specify this parameter in the “Specifications” field on “Edit -> Resource” dialog in order to have multiple CIP orders created with one click. A maximum count up to 50 is allowed.

If a resource group name is specified and the CIP rule and cleaning interval is set on that group all group members with the same CIP rule set will have CIP orders created on them.

How to set this up: